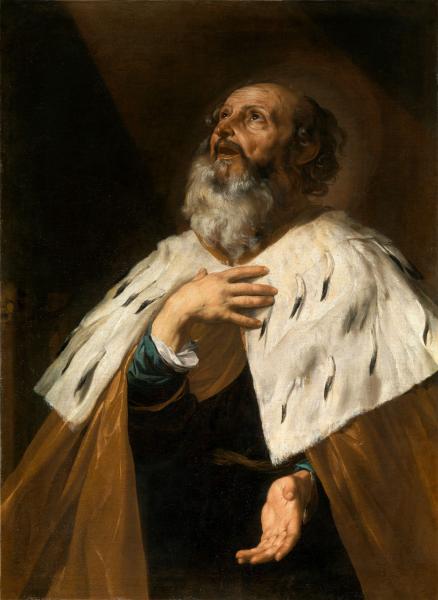 “These qualities lay in the varied and original approach to his subjects, and led him to be considered […] as the most immediate and rigorous exponent of Caravaggio’s early naturalism in Rome and Naples.”

Jusepe de Ribera was born in 1591 near Valencia in Spain, yet most of his life he worked and lived in Italy. There is uncertainty about Ribera’s early life and training, yet it seems likely that he studied in Valencia.1 The claim by painter and biographer Antonio Palomino de Castro y Velasco (1655–1726) that Ribera’s teacher was Francisco Ribalta (1565–1628) has been rejected, because of stylistic discrepancies in the years during which Ribera would have been his student.2 He was first recorded in Italy in 1611, being paid for a commission for the church of San Prospero in Parma. Even though he would never leave Italy again, his Spanish descent remained an important aspect of his identity, often signing his work referencing to his Spanish, Valencian or Játivian roots. In 1613, he became a member of the Accademia di San Luca in Rome.

Ribera’s works from his Roman period are characterised by naturalism and dramatic chiaroscuro, indicating that he studied Caravaggio (1571-1610) and Northern Caravaggesque painters, such as Hendrick ter Brugghen (1588–1629), Dirck van Baburen (1595–1624) and Gerrit van Honthorst (1592–1656). This newly discovered painting King David can be added to the group of monumental and isolated figures that are idiomatic of Ribera’s Roman years. Since no paintings of this kind exist in Caravaggio’s oeuvre, the iconographic invention of these half-length figures can be attributed to Ribera, who introduced them to the Roman scene from the early 1610s.3 In 1616, Ribera moved to Naples, which was then governed by Spain, where he married the daughter of a Sicilian painter. He rapidly gained prestige, receiving commissions from Cosimo II, Grand Duke of Tuscany (1590–1621), and the Viceroy of Naples, the 3rd Duke of Osuna (1574–1624).4 His most important patrons during the rest of his time in Naples remained the Spanish Viceroys and nobility, who favoured him over local artists because of his Spanish nationality.5

In the 1630s, Ribera’s style showed a growing influence of Bolognese art, using lighter colours and looser brushwork, yet he kept producing Caravaggesque works.6 Ribera would have been able to see the works of various Bolognese painters, like Guido Reni (1575–1642), in Neapolitan collections. A revived interest in Venetian cinquecento masters in Naples during the 1630s may also have played a role in influencing Ribera’s work. In the 1640s, Ribera’s production declined because of a chronic illness, forcing him to delegate a large number of works to his studio. His workshop trained some of the greatest Neapolitan painters, such as Salvator Rosa (1615–1673) and Luca Giordano (1634–1705).7 Ribera’s influence spread across Europe and was palpable especially in Spain, where his tenebrism was followed by Diego Velázquez (1599–1660), Francisco de Zurbarán (1598–1664), and Bartolomé Murillo (1617–1682) in his early career. Rembrandt (1606–1669) and Rubens (1577–1640) owned works by him. Ribera’s legacy in Naples was an extraordinary body of work that blends Caravaggio’s legacy and his own ingeniousness. He died in Naples in 1652.8