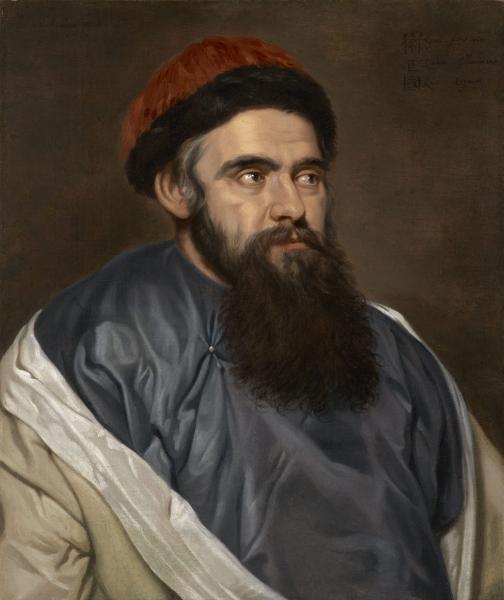 Portrait of Martino Martini (1614 – 1661), an italian jesuit missionary in china

“Michaelina’s development and career can be only be called glorious. Little about this woman was not exceptional: her talent, her versatility, her appearance – even the age that she had lived to (eighty-five) – were unusual for that period.”

We know very little about the life of this recently discovered Baroque woman artist. Michaelina Wautier was born in 1604 in Mons, in the county of Hainaut in the Southern Netherlands. She came from a family of means and followed her brother Charles (1609-1703), who was also an artist, to Brussels around 1640. Quite exceptionally, they both remained unmarried and lived in a large townhouse together near the Kappellekerk (Notre-Dame de la Chapelle). The two siblings seemed to be quite business-minded, as they were investors in the property market as well as having a career as painters.1

Wautier’s style shows little influence of contemporary masters of the Flemish Baroque, yet the multiplicity of references in her art is remarkable. Her works seem to display more likeness to French artists, like Simon Vouet (1590-1649) and Philippe de Champaigne (1602-1674), and more Italianate artists, such as the Flemish painter Theodoor van Loon (1581/2-1649), who moved to Italy in pursuit of Caravaggism, and her direct contemporary and fellow townsman, Michael Sweerts (1618-1664).2 It may have been Van Loon who was the source of Wautier’s fascination for the depiction of textiles. Sweerts spent some time in Italy as well and founded a life drawing academy in Brussels. Even though Michaelina is known to have painted male nudes from life, it is hard to imagine that as a woman she would have been allowed to join any academy to pursue artistic training. The likeness of her portraits to those by Sweerts does indicate her knowledge and appreciation of his work.3 This portrait of Martino Martini, in particular, is reminiscent of the sixteenth-century Venetian school, more specifically the famous portrait of Pietro Aretino (c. 1545) by Titian (1488-1576).4

In Brussels, Michaelina’s work caught the attention of Archduke Leopold Wilhelm of Austria (1614-1662), one of the most important collectors in Europe and Governor of the Spanish Netherlands at the time this portrait was painted. He collected locally, meaning he owned paintings of all the most prominent Southern-Netherlandish painters. Wautier is the only woman represented in this collection, and he owned four of her paintings.5 This portrait of the Jesuit, Martino Martini, was probably also commissioned by the Archduke, during Martini’s short stay in Brussels in the spring of 1654. Martini was a man of many talents who devoted his life to spreading the ideals of the Counter-Reformation, a mission the Archduke was equally passionate about.6 He was based in China, where he quickly took to the language and culture, which is proudly represented in this portrait. Not only does he wear the Manchu costume, but his name is painted in both Chinese and the corresponding Latin transcription, ‘Wei Kuangguo’, in the top right-hand corner of the portrait. The graceful calligraphy implies that it was painted on by either Martini himself or his Chinese assistant.7 The year 1654 marked a turning point in Michaelina’s oeuvre, and this prestigious portrait is the culmination point of her artistic development.8 No other woman artist from the seventeenth-century Netherlands has been able to produce such a diverse oeuvre at such a high technical level. She painted portraits, still lifes, but also genre and history pieces (both religious and profane), some of exceptionally large dimensions.9 She died in Brussels in 1689 at the age of 85.