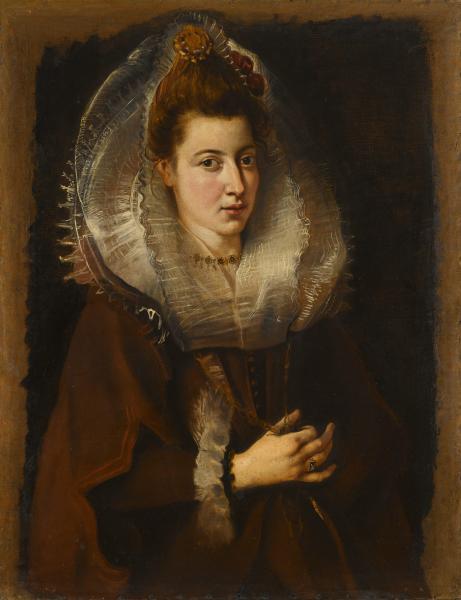 portrait of a young woman, half-length, holding a chain

“But he was more than just a brilliant painter. Rubens was the pictor doctus par excellence, an erudite painter who moved naturally from the culture of the antique to contemporary art, who immersed himself in history, and anchored the past in the present.”

Ben van Beneden, “Painting and the Arts in Antwerp, 1500-1650,” in From Titian to Rubens: Masterpieces from Antwerp and other Flemish Collections, p. 21.

Sir Peter Paul Rubens was born in Siegen, Westphalia, in 1577, after his parents Jan Rubens (d. 1587) and Maria Pypelinckx (d. 1608) had to flee the Spanish-occupied city of Antwerp because of Jan’s Calvinistic faith. When her husband died, Maria moved back to Antwerp with her two sons, Peter Paul and Philip (1574-1611). Upon their return to Antwerp, Rubens converted to Catholicism and attended the Latin school of Rombout Verdonck, receiving a thorough education in classics. Rubens trained with three different masters, Tobias Verhaecht (1561-1631), Adam van Noort (1562-1641), and Otto van Veen (c. 1556-1629).1 The latter was one of the most influential artists in Antwerp at the end of the 16th century who left a deep impression on the young artist, not only stylistically, but also by his humanistic learning.2 In 1598, Rubens became a master at the St Luke’s Guild.

Two years later, in May 1600, Rubens left for Italy where he would stay until 1609. In Venice, he was introduced to Vincenzo I Gonzaga (1562-1612), Duke of Mantua, who appointed him court painter, a position that brought many opportunities.3 Mantua was known to be an arts center and had been the home of several great painters, all of whom were represented in the unrivalled Gonzaga collection, offering Rubens plenty of artistic treasures by the likes of Mantegna (1431-1506), Bellini (1430-1516), and Titian (1490-1576) to copy and study. Gonzaga allowed Rubens to travel freely, and he visited Rome, Florence, Madrid, Valladolid and Genoa, amongst others, where he accepted many religious and private commissions from other patrons.4 In 1603, Rubens took his first trip to Spain on behalf of the Duke of Mantua to deliver official presents to the court of Philip III of Spain (1578-1621). The sober dress of typical Spanish fashion in this Portrait of a Young Woman suggests it was painted during this trip to Spain. However, it is more likely that it was painted during Rubens’ stay in Genoa in 1605-1606 for a member of the Genoese court, where this type of portrait was a popular way to highlight one’s influence and status. Additionally, it was during this Genoese period that Rubens lived up to his full potential as brilliant portraitist, painting many members of the city’s aristocratic families.5 Alongside the bold painterly strokes made to convey the sleeve and ruff collar, the sitter’s face and hand are finished to a high degree, demonstrating Rubens’ bravura and masterly control of the paintbrush. Rubens had a longer stay in Rome from 1606-1608, during which he lived with his older brother Philip, a scholar and jurist who introduced his younger brother to his network of humanists, antiquarians and scientists. Rubens was forced to leave Italy when he was called back to Antwerp when his mother died in 1608.6 His stay in Italy would leave a permanent impression on Rubens’ career. No other painter was so accustomed to the classical tradition and the legacy of the Italian masters that came before him.7

His arrival in Antwerp came at an extremely fortunate time. He returned at the start of the Twelve Year’s Truce (1609-1621) to a city that prospered under the government of the Archdukes Albert (1559-1621) and Isabella (1566-1633).8 Many churches in the Southern Netherlands had suffered severe damage by the religious wars of the previous century and needed redecorating following the ideals of the Counter Reformation. Another important factor was that Antwerp was controlled by a wealthy upper-class of merchants, who funded many of the new religious works, such as Cornelis van der Geest (1577-1638) and Nicolaas Rockox (1560-1640). In 1609, Rubens was appointed court painter by the archducal couple Albert and Isabella, whose connection to other European courts enabled Rubens’ fame to spread beyond the Southern Netherlands. The huge surge in commissions that followed, from clergy, bourgeoisie and aristocracy, both locally and abroad, created the need for a large workshop of assistants, apprentices, collaborators, and engravers, making Rubens one of the most prolific painters in history. His most talented student was Sir Anthony van Dyck (1599-1641), who was incredibly gifted at imitating Rubens’ style.9

Rubens’ return to Antwerp took the artistic production in the city by storm and his art was a catalyst for the quintessential Southern Netherlandish pictorial style of the high Baroque.10 He had to adapt to the local Flemish style, but managed to innovate and keep the interest of his patrons by blending the features of the Italian High Renaissance, such as highly sculptural figures, combined with northern realism and love of landscape, while adopting a cooler colour palette.11 Many of his works were copied in his studio and engraved, ensuring the widespread admiration and following of Rubénisme across the continent.12

In 1609, Rubens married Isabella Brant (1591-1626), a member of the upper bourgeoisie and daughter of an important city official, with whom he had two children. The following year, he bought a large house on the Wapper, which he turned into an Italianate palazzetto, a small palace. It included a large studio and a semi-circular gallery inspired by classical architecture, and a triumphal arc as the entrance to the large garden.13 Rubens never ceased to deepen his classical learning, entertaining relationships with a number of scholars and antiquarians. He was an enthusiastic collector of antique sculptures and cameos that were scattered around his house, and was even known to trade some of his own paintings for old marbles.

In the 1620s, Rubens was increasingly involved in politics as a close adviser of Archduchess Isabella. The Twelve Year’s Truce had expired and the Archduke Albert had died. Rubens offered council to the widowed Archduchess who tried to ensure a stable political environment.14 By this point, Rubens was known as “the painter of princes and the prince of painters”, allowing him to visit royal courts freely for diplomatic purposes. Rubens made numerous diplomatic trips on Isabella’s behalf, including to the Dutch Republic in 1627 and Spain in 1628, which gave him the opportunity to study and copy paintings in El Escorial by Titian, whose influence is particularly notable in Rubens’ later works.15 Rubens’ diplomatic skills did not go unnoticed, and the King of Spain, Philip IV (1605-1665), asked Rubens to go to England and pave the way for a peace treaty between the two countries. He succeeded and Charles I (1600-1649) knighted him for both his political and artistic achievements.16 Rubens complained that he was “the busiest and most harassed man in the world,” yet he kept accepting commissions from all sorts of patrons, and after his return to Antwerp, he was finally able to devote himself to his “beloved profession” again.17

In 1630, 4 years after his first wife Isabella died, Rubens remarried the much younger Hélène Fourment (1614-1673). He considered her his muse and they had a happy marriage and 5 children together.18 He continued to work for Archduchess Isabella, but no longer pursued diplomatic endeavours for her or her successor, Cardinal-Infante Ferdinand (1619-1641). In these later years, Rubens was commissioned one of his biggest projects: over 100 scenes from Ovid’s Metamorphoses were ordered by Philip IV for his hunting lodge, a huge undertaking for which Jacob Jordaens (1593-1678) was one of the many assistants.19 In these later years of the 1630s, Rubens’ health steeply declined, with heavy bouts of gout preventing him to exercise his beloved profession.20 He and his family retired to Het Steen, a countryside manor he acquired in 1635, where he continued to paint some landscape scenes that reflect his great love of nature.21 He wrote to a friend: “I am leading a quiet life with my wife and children and have no pretension in the world other than to live in peace.” After a severe attack of gout, Rubens died in 1640 and was buried in the Jacobskerk in Antwerp. Rubens was without a doubt one of the most assimilative, productive, and versatile painters that ever lived, with seemingly limitless creative resources, a multifaceted brilliance that extended far beyond painting, and a stylistic influence that would carry over three centuries and across borders.22

(Possibly) Commissioned by Vincenzo I Gonzaga, Duke of Mantua (1562-1612), for his ‘Gallery of Beauties’.
Unknown Venetian collection, from where appropriated by the Reale Accademia delle Belle Arti, Venice, at the beginning of the 19th century and released onto the Art Market.
(Probably) Sir John Hanmer, 3rd Bt. (1809-1881), mid-19th century, possibly at Bettisfield Park, Hanmer, Wrexham, Wales (with a seal of the Hanmer family crest on the reverse).
Private collection, acquired in 1986;
Anonymous sale; Christie’s, London, 29 July 2020, lot 8;
The Klesch Collection.

Houston, Museum of Fine Arts, on loan, 2010-2019.
Venice, Palazzo Ducale, “From Titian to Rubens: Masterpieces from Antwerp and other Flemish Collections”, 5 September 2019-1 March 2020, no. 52 (catalogue entry by Ben van Beneden).
Currently on loan to The Rubens House, Antwerp.