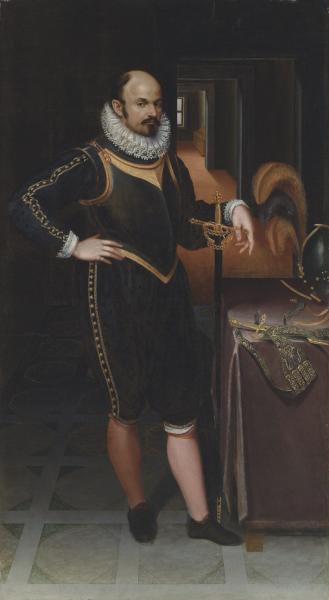 “For some time, all the Ladies of the City would compete in wishing to have her [Lavinia Fontana] close to them, treating her and embracing her with extraordinary demonstrations of love and respect, considering themselves fortunate to have seen her on the street, or to have meetings in the company of the virtuous young woman; the greatest thing that they desired would be to have her paint their portraits, prizing them in such a way that in our day no greater prices could be charged by a Vandych [sic] or a Monsu Giusto […]”

Lavinia Fontana was born in Bologna in 1552 as the daughter of the Mannerist painter Prospero Fontana (1512-1597). Prospero trained her in his own studio and her first recorded works, dating from 1575, were small devotional works.1 Bolognese society was supportive of Fontana and she enjoyed the loyal patronage of many female clients,2 who competed for her services as a portraitist.3 Her paintings were admired for the attention to detail in the depiction jewels and in the embroidery of the dresses, which makes her work comparable to another successful female painter, Sofonisba Anguissola (1532-1625).4 In 1577, Fontana married fellow painter Gian Paolo Zappi, with whom she had 11 children. Fontana was so successful that instead of ending her career after marriage and motherhood, she remained the breadwinner whilst Zappi gave up his own career as a painter and ran the household, acted as Fontana’s agent, and assisted in the studio.5

By 1581, Fontana’s reputation as a portrait painter was known beyond Bologna, securing her the commission for this Portrait of Count Gentile Sassatelli. Count Sassatelli was a military man from Imola, a town near Bologna, who acted on behalf of the Papal State and was made Knight of the Order of Saint Stephen by Cosimo I Medici (1519-1574) as a reward for his bravery in battle, the cross of which has been added to the coat-of-arms. Befitting of Sassatelli’s status and achievements, Fontana followed the official aristocratical style of portraiture that was perfected at the Spanish court of Philip II (1527-1598) and subsequently disseminated all across Europe. This ambitious portrait demonstrates Fontana’s skill as a portraitist and it is the most important male portrait she ever painted.6

At about 1600, her work was introduced to Rome, where she moved in 1603 at the invitation of Pope Clement VIII (1536-1605) and was appointed as Portraitist in Ordinary at the Vatican.7 She received various honours, and was elected into the Accademia di San Luca of Rome, a rarity for a woman.8 Although most prolific in portraiture, Fontana also painted many mythological and religious works, some of which were large altarpieces for churches in her hometown. Fontana was one of the last Mannerist painters, and her versatility within a substantial oeuvre is impressive. Her body of work is the largest of any female painter active before 1700.9 She died in Rome in 1613 and was buried in the Church of Santa Maria sopra Minerva.