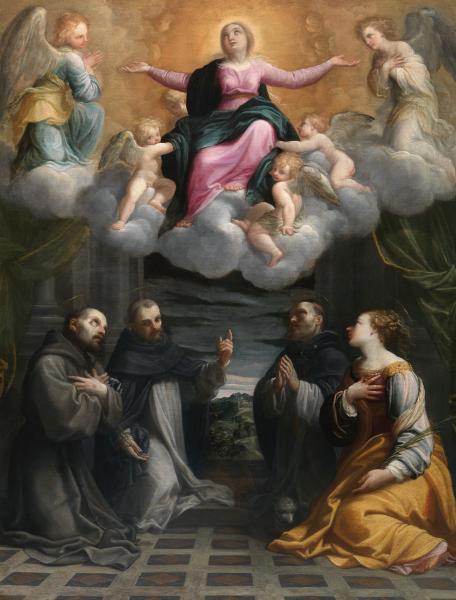 the assumption of the virgin and angels with st. francis, st. dominic, st. peter martyr and st. agnes

Guido Reni was an early Baroque Bolognese painter, born in 1575. He joined the studio of the Flemish painter Denys Calvaert (1540-1619) in Bologna as an apprentice at the age of 10. After working there for 10 years, he moved to the Accademia degli Incamminati, the academy led by Ludovico Carracci (1555-1619), together with his fellow student Domenichino (1581-1641). He left the academy in 1598, joined the guild in 1599 and divided his time between studios in Bologna and Rome.1 In these six years between leaving the studio of Calvaert and going to Rome, he built of a wealth of experience, moving on from Calvaert’s later Mannerist style and the naturalism typical of the Carracci, and started to paint more in line with the classical idealism that remained his most authentic feature throughout his career. This newly discovered painting, The Assumption of the Virgin with Angels and Saints, is an outstanding addition to the early oeuvre of the artist and was likely a small altarpiece for a private oratory.2

Reni quickly became a household name for the most powerful men in Rome, such as Pope Paul V (1550-1621) and Cardinal Scipione Borghese (1577-1633). An account book that Reni kept in Rome gives details of his career, which during the Roman years, featured conflicts with papal authorities over his work and payments. Possibly fed up by working for Roman patrons, Reni moved back to Bologna in 1614 for the rest of his life. After the death of the Carracci, he was the head of the Bolognese school and had a successful studio. This period marked the height of his career. He was still mainly painting religious pieces, and his colour refinement and handling of drapery were unmatched. By the 1630s, Reni’s painting style became looser and he focussed on the lighter colours, using original combinations of pastel hues.4 Religious compositions were what Reni did best and they can be found in some of Europe’s most significant churches, chapels and collections. They made him a famous painter across Europe in his day and inspired many other Baroque artists.5 He died in Bologna in 1642.