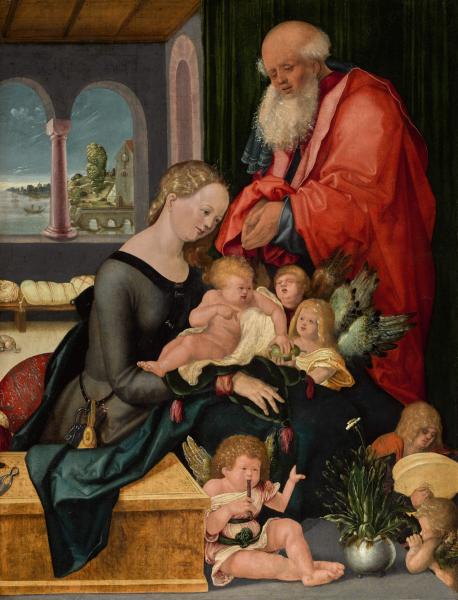 the holy family with five angels

“In terms of inventive power, passion for sensation and creative imagination, Baldung is not inferior to any of the great masters of his generation.”

Hans Baldung, called Grien, was born c. 1484/5 to a successful German family of lawyers and doctors that settled in Strasbourg in the 1490s. Unlike the other men in his family, Baldung did not receive a university education. It is unknown where and from whom Baldung received his artistic training, but it is assumed he trained in Strasbourg around 1499/1500.1 By 1503, Baldung had become a member of Albrecht Dürer’s workshop (1471-1528) and quickly became one of Dürer’s most trusted assistants, being left to run his workshop during his master’s second trip to Venice (1505-1507).2 Baldung most likely got his nickname ‘Grien’ (green) during his time in Dürer’s studio, probably as a way to discern him from other artists with the same name, like Hans Schäufelin (c. 1480/85 – 1538/1540) and Hans Süß von Kulmbach (c. 1485-1522).3 Baldung and Dürer remained close friends throughout their lives.4

Baldung was an accomplished and greatly sought-after artist already early on in his career. In 1507/1508, he went to Halle, where he was commissioned two important altarpieces that were later installed in the town’s Collegiate Church, built by Cardinal Albrecht von Brandenburg (1490-1545) against the spread of the Lutheran Reformation.5 It was during these early days of his career that Baldung painted this Holy Family with Five Angels, either when he was still active in Dürer’s workshop or shortly after, and the painting is, as to be expected, greatly indebted to Baldung’s master. It is clear that during this time Baldung was well-versed in Dürer’s artistic language. The extreme precision and detail in which Baldung painted the angel’s wings echoes Dürer’s fascination with bird feathers at the time. Also curious are the depictions of the gondola and the Italianate loggia as well as the more Venetian colouring, which allow speculation on Dürer’s involvement in this Holy Family just after his return from Venice. Baldung clearly also looked to the arts of the Netherlands for inspiration, which he probably came into contact with in the Upper Rhine area and Halle. The view of the landscape through the window and the highly naturalistic details of daily objects (such as the keys and purse on Mary’s belt), are reminiscent of the works by Jan van Eyck (1390-1441) and Robert Campin (c. 1375-1444).6

Baldung settled in the humanist centre of Strasbourg by 1509, where he married the next year, and his style grew independent from Dürer’s. After 1520, Baldung’s works became increasingly more Mannerist, characterised by free line and an, often intentionally, shocking vibrancy in colour. Even though he still painted religious subjects, Baldung accepted more portrait and secular commissions, which was partly caused by the Reformation’s restraints on religious art.7 Baldung is mainly remembered as Dürer’s best assistant, but, more importantly, he was one of the most prolific and imaginative artists of the German renaissance, being active as a painter, draughtsman, printmaker and designer of stained-glass windows, working in subjects ranging from the conservative to the occult and erotic. By the time of his death in 1545, Baldung was considerably wealthy and a respected member of the Strasbourg city council. He died childless and left his estate to his student Nikolaus Kremer (c. 1500-1553).8