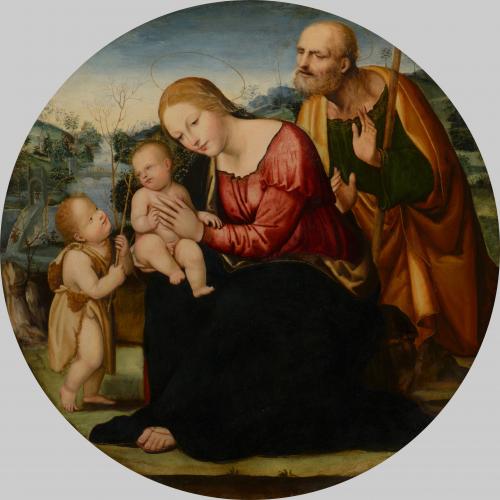 “Sodoma had a peculiar gift for suggesting the sensuous beauty of the human form and an exaggerated, almost mystical, emotionalism that anticipates one aspect of the Baroque.”

Giovanni Antonio Bazzi, called Il Sodoma, was born in 1477 in Vercelli, Piedmont, as the son of a shoemaker. In the last decade of the 15th century, Sodoma was an apprentice to Giovanni Martino Spanzotti (1455-1528), and during his artistic training in Lombardy, Sodoma was strongly influenced by the works of Leonardo Da Vinci (1452-1519) (“Il Sodoma”, n.d., para. 2). This affinity is particularly marked in the present work, in the naturalistic features of St. Joseph, reminiscent of Leonardo’s physiognomies.

In 1501 Sodoma went to Siena, where he combined the High Renaissance style of the early 16th century with the local, more provincial Sienese artistic style, thus ensuring his popularity with the most important religious and private patrons (Tartuferi, 1991, p. 92).

Sodoma painted the present tondo early in his career, before he left Siena for Rome in 1508, when he was invited by Pope Julius II (1443-1513) to work at the Vatican. There, he worked on the Stanza della Segnatura alongside Raphael (1483-1520) whose influence can be seen in Sodoma’s mature style. He returned to Siena in 1510, where he was to spend most of his time until his death in 1549.

Sodoma gained great recognition during his own life and was rewarded by Pope Leo X (1475-1521) with the title of Cavaliere, and by Charles V (1500-1558), who granted Sodoma the title of Count Palatine of the Lateran, an honour bestowed on only two other artists during the 16th century: Titian and Arcimboldo (DaCosta Kaufmann, 2009, p. 49). 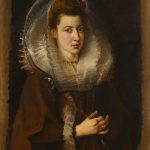