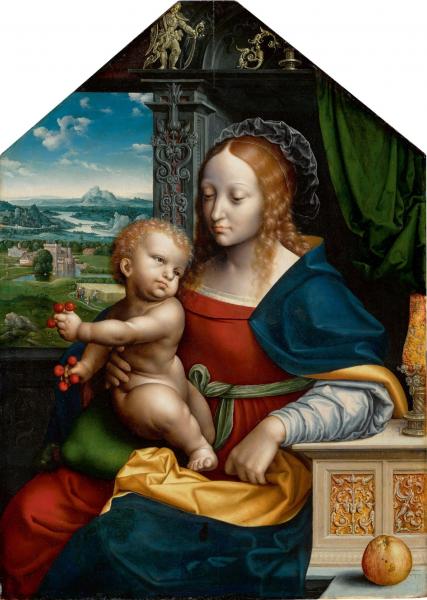 The madonna of the cherries

“Joos’ best adaptations of Leonardo resulted in a fruitful combination of the figurative grace and harmony of Italian colouring, and the Dutch surface treatment and the richness of detail, which created a new hybrid form.”

The early years of Joos van Cleve are not well documented, though his name implies he probably came from the region around the lower Rhenish city of Kleve. He was likely born around 1485 and started training with Jan Joest (1450-1519) in Kalkar around 1505.

By 1511, Joos van Cleve emigrated to Antwerp where he became a free master in the Guild of Saint Luke. He received several commissions from Cologne, and until his identity was discovered by later art historians, his well-known Death of the Virgin triptychs gave him the provisional name of ‘Master of the Death of the Virgin’. He was undoubtedly one of the most acclaimed artists working in Antwerp at that time and a leading figure in the Italianizing style popular in Flanders.1 It is due to his Leonardesque style of painting, both in composition and execution, like this Madonna of the Cherries, that he became known as the ‘Leonardo of the North’. This composition was one of his most celebrated and exists in over thirty versions, of which The Klesch Collection’s painting is recognised as one of the strongest of the group by both Peter van den Brink2 and John Oliver Hand.3 Van Cleve is believed to have been portraitist to Francis I of France (1494-1547), and his portrait of Henry VIII (1491-1547) suggest he may have been invited to the English court as well (“Joos van Cleve”, n.d., para. 2).4 He died in Antwerp around 1640/41.