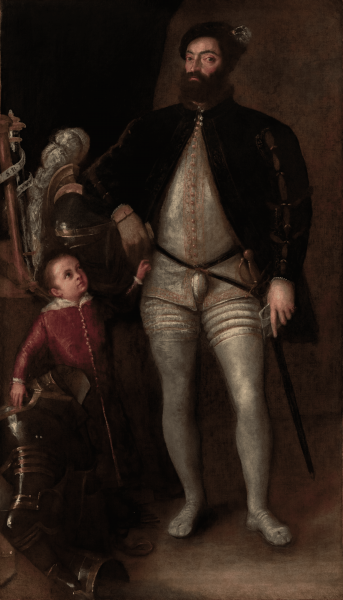 “But of all, Titian shines like the sun amidst small stars, not only among the Italians, but all the painters of the world […]”

Tiziano Vecellio, or Titian, was the greatest Italian Renaissance painter of the Venetian school and the first Venetian painter to achieve fame across the European continent. He was also the first to be employed primarily by clients outside of his home town and his work was represented at an early date in major collections throughout Italy, as well as in Spain and France.1 There is some uncertainty about his birth date, but most critics today favour 1488/90. He was born in the small village Pieve di Cadore, and at the age of nine he set out for Venice with his brother, to live with his uncle and start training as an artist. Soon he joined the workshop of Giovanni Bellini (1430-1516), the best Venetian painter of that time. Titian’s early work is evident of his schooling with Bellini and also shows influences of his elder contemporary, Giorgione (1477/78-1510).2

Titian’s early documented commissions were executed around 1510, and even at that time his confidence and talent were indisputable.3 At a very young age, he received commissions from the Venetian government, painting a large canvas for the Doge’s Palace, painted several large-scale altarpieces for the patrician Pesaro family, and came to the attention of royalty, such as Alfonso d’Este (1476-1534), Duke of Ferrara.4 His success in Ferrara led to more involvement with other North Italian princes, such as Federigo Gonzaga, Duke of Mantua (1500-1540) and later, in the 1530s, Francesco Maria della Rovere (1490-1538), Duke of Urbino. Titian’s work was in such high demand that even the most powerful patrons of Europe, such as Emperor Charles V (1500-1558) and several popes, were competing for Titian’s services.5 It was, however, the Emperor’s son, Philip II of Spain (1527-1598), who was his most important patron of all. During the last 25 years of the artist’s life, Philip II commissioned most of Titian’s best works, such as his famous Poesie series,6 a series that would mark a turning point in European painting.7

Throughout his career, Titian was highly sought after for portraiture. His sitters, like his patrons for mythological and religious paintings, were some of the most prominent and influential people of his day.8 The double portrait of Guidobaldo II and his son is one of the small handful of full-length portraits he painted and represents one of his key patrons, Guidobaldo II della Rovere (1514-1574). Guidobaldo II was Duke of Urbino from 1538 until his death and was a military commander for the Venetian Republic, the King of Spain, and the Papal States.9 Guidobaldo II’s parents, Francesco Maria della Rovere (1490-1509) and Eleonora Gonzaga (1493-1570) had already been portrayed by Titian, and as an important Venetian figure, it was obvious that Guidobaldo II would also turn to Titian for his services.10 Some of Titian’s most famous paintings were commissioned by Guidobaldo II, such as the Venus of Urbino (Uffizi, Florence). Guidobaldo II was married twice. His first marriage was to Giulia Varano (1523-1547) in 1534, whom he married to obtain the Duchy of Camerino. Pope Paul III (1468-1549), however, forced Guidobaldo II to give up his rights to the Duchy and bestowed them to his grandson, Ottavio Farnese (1524-1586). Giulia died in 1547, leaving Guidobaldo II with only a daughter from this marriage. He quickly joined the papal camp by marrying Vittoria Farnese (1521-1602), granddaughter of the Pope. This marriage gave Guidobaldo II his only son and heir, Francesco Maria II (1549-1631), and two daughters.11 This portrait of Guidobaldo II and Francesco Maria II was made to celebrate the securing of a successor and a number of his appointments, as indicated by the batons on display. The silver baton signifies his command over Venice, whereas the gold baton refers to his role as captain-general of the Papacy, acquired in 1553. As recent research shows, both batons and the banderole with the letters “S R E / S U R F” (Sanctae Romanae Ecclesia / Signifer Urbis Romae Praefectus) where added later in 1555, when Guidobaldo II was appointed as prefect to the Holy Roman Church in the City of Rome.12 The fascinating story of Guidobaldo’s central role in Italian politics, as well as the painting’s provenance and its thorough restoration, have been collated in the recent publication Titian, the Della Rovere Dynasty, & his Portrait of Guidobaldo II and his Son, by Anne-Marie Eze, Matthew Hayes, Ian Kennedy and Ian Verstegen (2021).

Titian was always regarded as an exquisite master of colour. He used the highest quality of pigments, knew how to exploit and manipulate the medium to achieve depth and intensity, or softness and translucency. Titian also pioneered using the structure of the canvas as a pictorial element. His painting technique was highly evocative, using varying degrees of paint thickness, uneven textures, and making frequent and radical revisions.13 This style is already evident in his earlier art, but became more pronounced further into his career as his work gradually became sketchier, looser, and painted with differing degrees of finish.14 Most of the leading painters from the seventeenth century, such as Rubens, Diego Velázquez (1599-1660), and Rembrandt van Rijn (1606-1669) are indebted to Titian’s pictorial and technical innovations. Titian died in Venice in 1576 around the old age of 85, when the city was struck by the worst plague of the sixteenth century, and was buried in Santa Maria dei Frari.15

If you wish to use this image for educational purposes, please contact us.